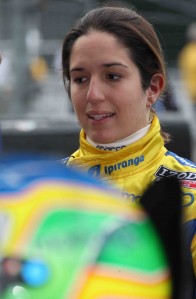 Beatriz has recently undergone surgery to repair the scaphoid bone (wrist) that was injured during the first round of the season at St Petersburg.

Pagenaud, 26, will drive the No. 24 Dreyer & Reinbold Racing entry. It will be his IndyCar debut.

“I’m fortunate to have the opportunity to drive Bia’s No. 24 IndyCar this weekend,” the reigning American Le Mans Series champion said.

“It’s an awkward situation and not the best for a driver to race in circumstances like this, but I wish her the best and hope she has a very quick recovery and I will work hard for a good finish for DRR, Bia and Ipiranga/Blazemaster.

“I’ve been looking to get into IndyCar for several years and now is my chance, so I just have to say thank you to everyone for giving me the opportunity.”

Beatriz, 24, suffered the injury on Lap 5 of the Honda Grand Prix of St. Petersburg when her car made contact with the No. 38 car driven by Graham Rahal. She soldiered on, advancing six positions to finish 14th.

“I could feel that my hand was sore and as the race went on it started to bother me more and I was in a lot of pain,” she said.

“I was just focused and determined on finishing the race. I really wanted it knowing that I wasn’t 100 percent. Fortunately, I was able to finish the race and I got some good experience under my belt.

“It wasn’t until after the race that I realized that something was actually broken. I was pretty upset, but the team and the league have been great. I’m putting a lot of effort in being ready for Long Beach (April 17).”