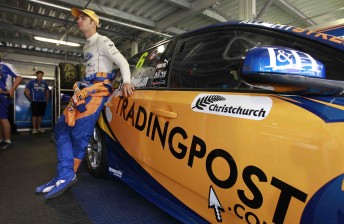 Ford Performance Racing drivers Mark Winterbottom, Will Davison and Paul Dumbrell will make a goodwill visit to earthquake ravaged Christchurch next week ahead of the ITM400 Hamilton.

The factory Ford trio will spend time with two Ford dealerships’ staff and family that have been affected by the earthquake, which devastated the city last month.

Winterbottom, Davison and Dumbrell will visit the still inaccessible Team Hutchinson Ford in central Christchurch and from the nearby Avon City Ford.

The drivers will also witness first hand the devastation caused by the 22 February earthquake when they visit Team Hutchinson Ford which is located within the still cordoned-off ‘Red Zone.’

Dumbrell hopes he and his team-mates can provide support to the people they meet.

“What has happened in Christchurch is terrible and it probably has not had the exposure it needs since the events in Japan,” Dumbrell said.

“I am glad we get the chance to meet some of the people that have been affected and give back something however small to make their life slightly better than it has been lately.”

V8 Supercars has played an ongoing role in raising awareness of the plight of Cantabrians since the earthquake and ran ‘Christchurch’ door stickers on all 28 cars at the Clipsal 500 last month – something this series will repeat in Hamilton.

The series is continuing its support in the lead-up to the Hamilton race, with $5 from pre-purchase event tickets being donated to the Christchurch relief fund.

The ITM400 Hamilton will be held next weekend.