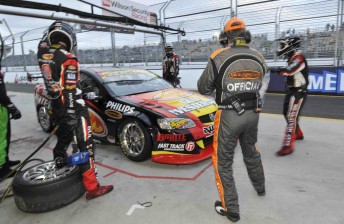 Lucas Dumbrell Motorsport is in a race against time to get its Gulf Western Oils Commodore VE prepared for its flight to New Zealand this Sunday.

The second-year squad has been the victim of two major incidents in the past two events, with Warren Luff clouting the wall at the Clipsal 500 and then being the innocent party in the Race 3 carnage at Albert Park.

The staff of five (smallest in the V8 paddock) has worked overtime to repair the car after its recent wreck.

What has complicated the Melbourne-based team’s preparation even further is that for the trip across the Tasman, Luff’s car is being cargoed from Brisbane, costing the team an extra day in travel time.

For each flyaway race, one Victorian V8 team is enforced to send its car from Brisbane, while the rest get loaded and launched from Avalon, Victoria.

Dumbrell is confident that car will arrive in Brisbane on time for the Sunday morning flight, but admits his team has been up against the clock.

“We’ve had a couple of days less to do it this time as well as our car is flying out of Brisbane with all the Queensland-based teams, and that’s made it harder,” Dumbrell said.

“To be honest, I feel like we haven’t really had any luck in our first 18 months of operation and the damage we’ve incurred in the last two events just underlines that.

“Warren’s had two big accidents; the first in Adelaide when a $20 wiper motor failed, he couldn’t see in the rain and hit the wall. Then after a round-the-clock effort to get the car ready for the Grand Prix in Melbourne just a week later another when Warren got caught up in someone else’s accident.

“It’s been pretty disheartening bringing the car home all smashed. The team has had to work some outrageous hours in the past few weeks, but that’s the game we’re in.

“On top of the man hours it takes to repair the car there’s the dollar value which probably totals around $50,000. That might be okay if you’re HRT or FPR, but it’s not that easy to swallow when you’re the smallest team in the field.”

For driver Luff, who is making a full-time return to the V8 Supercar Championship in 2011, the incidents are an unwelcome distraction for such a small team.

“I feel really sorry for the boys in the LDM workshop because they are the ones that have had to put it back together again each time,” Luff said.

“Both times the car was pretty heavily damaged but it’s like a David-v-Goliath effort with the Gulf Western Oil team – we’re the small guys taking on the giants and we’re fighting like crazy.”

The ITM400 at Hamilton will be held next weekend at the New Zealand.