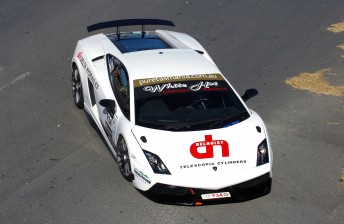 Reigning Targa Tasmania champion, Jason White, has set the pace around the packed streets of George Town during the Temco Prologue.

Driving his Lamborghini Gallardo Superleggera, White was an impressive five seconds quicker than the Nissan GT-R of Tony Quinn, with fellow Queenslander Tim Hendy a further second back in a 2005 Daytona Coupe.

In perfect weather conditions, the 20th anniversary edition of Targa Tasmania went off without a hitch, with the flame-throwing Lamborghini of  White once again proving that he’ll be the man to catch.

He was clearly faster than his rivals, although White knows that the Temco Prologue stage means little in a six-day tarmac rally.

“It’s always good to blow off a bit of steam around here, but I think we were four seconds slower than last year.

“We had a bit of a misdemeanour in the first couple of corners. The roads have been resealed and there’s loose gravel on them. We had a close look at the very first gutter we came across, which didn’t set a very good scene for the rest of it, and we didn’t know if there were going to be any more surprises.

“But it all went quite well, we had some fun, and we’re all geared up for the rest of the event.”

Touring car legend Dick Johnson, took things steadily in his 2009 Chevrolet Corvette Z06, with his eyes firmly on reaching the finish of the event.

“Today is all about familiarising everyone with what’s coming up, but you don’t win it on the first day, not that our intentions are to win it,” said Johnson.

“We just want to get to the end and make sure we go well.

“The car feels fine, but it’s very difficult to find out what it can do on a street stage, but I’m happy with it, and looking forward to the rest of the event.”

The factory cars battled it out in the Showroom class, with Mazda’s Brendan Reeves taking a clear victory ahead of motoring journalist, Mike Sinclair, in his Skoda Octavia RS.

In the Classic Outright competition, it was the Datsun 240Z of Jon Siddins who upstaged perennial winner Rex Broadbent (Porsche 911), with German superstar, two-time World Rally Champion Walter Rohrl, settling into the event with the sixth fastest time for cars made pre-1986.

“It was a nice experience,” said Rohrl.

“It’s the first time I’ve been back on a special stage in this car and it just seems like 30 years ago. I feel like I’ve jumped back in time 30 years, like a young guy.

“For me the biggest thing I don’t know is tyres, because I have no experience of racing where I have to save my tyres. It will be a challenge for me to see how fast I can go and save my tyres.”

The first day of Targa Tasmania gets underway from the Launceston tomorrow morning, with competitors to tackle eight Targa stages to the north and west of Launceston.

Here is the TV package from Southern Cross News