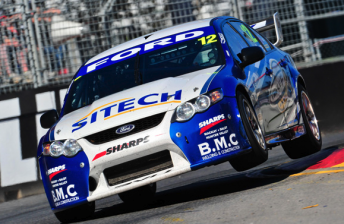 Michael Patrizi has been confirmed as Dean Fiore’s co-driver for the 2011 V8 Supercars endurance races at Phillip Island and Bathurst.

It will be the second straight year that the West Australian pair has driven together.

Team owner/driver Fiore is pleased to have secured the Carrera Cup driver alongside him for the two-driver races.

“I am very excited to have Michael on board again this year,” he said.

“It’s great that he has got a drive in Carrera Cup this year in order to keep up his race craft in the lead up to the endurance races. He did an excellent job last year, and we had fantastic pace at Phillip Island so I am looking forward to this year.”

The Fiore/Patrizi combination finished last year’s L&H 500 Phillip Island event in a solid 14th position and hope to be pushing further forward this year in the #12 FG Falcon.

“I am very happy with the decision to be lined up with Dean and Triple F Racing again this year,” Patrizi said.

“I believe continuity is a good thing in motorsport and I feel comfortable that we can have good results at the endurances races later this year.”