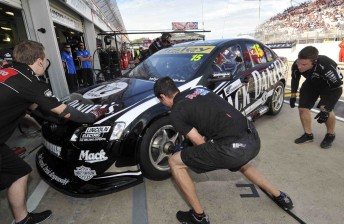 Kelly Racing has locked in its endurance line-up for the 2011 V8 Supercars endurances races at the L&H 500 and the Supercheap Auto Bathurst 1000.

Team owner driver Rick Kelly says that he is pleased to have a strong line-up confirmed.

“We’ve already made them a part of our training programs and engineering meetings as we plan for Phillip Island and Bathurst.

“It’s really good to be sorted so early in the year. When you are looking for four co-drivers it’s not easy, but we are really pleased to have four guys that can do the job and work well with our four full-time drivers, as well as our engineers.

“We have four cars that we need supported at the highest level and having all cars at such a high standard is really pushing me a lot more as a driver.

“It’s exciting for the team that we are all helping each other, but also looking at how we can push harder to beat each other, and that’s exactly what we need as a team.

“We also need co-drivers to support that level of main game driver and I think we’ve got that. It’s important that we have squared this away early so that when we get to the first enduro it feels like we have all been together forever.”

The only drivers remaining unaccounted for now in the endurance driver lists are for Tony D’Alberto Racing and Garry Rogers Motorsport.

As reported previously, Shane Price and Marcus Marshall have been linked to GRM’s ride, while D’Alberto’s team continues to evaluate potential drivers for the #3 Wilson Security Racing Falcon FG.

See below for an unoffical list of teams and drivers for this year’s endurance races.