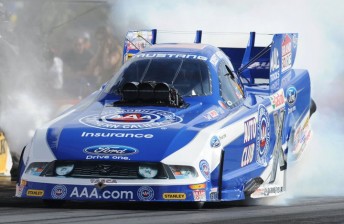 Robert Hight continued John Force Racing’s domination of the Funny Car category by racing to victory Sunday at the SummitRacing.com NHRA Nationals at The Strip at Las Vegas Motor Speedway.

Robert Hight’s victory, his second of the season, was the fifth in a row for the team, which included two wins to close the 2010 season by John Force and last month’s Tire Kingdom Gatornationals victory by Mike Neff. Hight, who also won the season opening Kragen O’Reilly Winternationals, moved into the series lead with the win, his second at this event and 20th of his career.

Hight, who beat Jim Head, Jack Beckman and Cruz Pedregon in earlier rounds, powered past Gray in the final round. Hight’s Auto Club Ford Mustang covered the distance in 4.149 at 307.79 to edge Gray’s Service Central Dodge Charger at the finish line, which ran 4.169 at 301.81.

“My guys were so pumped today,” Hight said.

“We’re having a great time at John Force Racing.”

Antron Brown defeated Brandon Bernstein for the Top Fuel victory. It was Brown’s 26th career victory (10th in Top Fuel) and first ever at this track. Brown posted a 3.887 at 318.84 in his Aaron’s/Matco Tools dragster to cross the finish line in front of Bernstein’s Copart dragster, which trailed with a 3.947 at 311.13.

“This car was great all weekend. It feels good to hit the jackpot here.”

Series leader Del Worsham lost in the semi-finals and now leads Brown by eight points. Tony Schumacher and Larry Dixon are third and fourth in the standings, respectively.

Mike Edwards claimed his first Pro Stock win of the season and second straight at this event by defeating rookie and first time finalist Vincent Nobile. Edwards ran 6.695 at 205.98 in his Penhall/Interstate Batteries Pontiac GXP to take his 29th career victory and hold off Nobile, who finished in 6.713 at 205.69 in his Mount View Tire Dodge Avenger.

Edwards, who was the event’s top qualifier, defeated Richard Freeman, Erica Enders and V. Gaines in the first three rounds. The victory moves Edwards to fourth place in the point standings and helps to erase a slow start to the season, which included a DNQ at Pomona.

“We’ve struggled and I’ll be the first to admit it,” said Edwards.

“But I’ve got a great team with a great group of guys and I’m truly proud of my team this weekend. I really can’t say enough for all of the support that we’ve got from everyone associated with the team. This win is very special.”

Next up for the NHRA is the unique 4Wide Nationals at zMAX Dragway in Charlotte North Carolina.