Ambrose a victim of Martinsville carnage

Ambrose a victim of Martinsville carnage 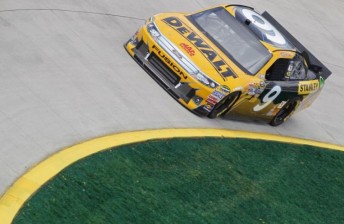 Ambrose was out of luck at Martinsville

Marcos Ambrose has described himself as a ‘victim’ after being spun into the outside wall early in the Goody’s Fast Relief 500 at Martinsville Speedway.

Ambrose had been running in the top 20 for the opening stanza of the race, and trailed team-mate AJ Allmendinger in 16th position when he was hit from behind by Michael McDowell on Lap 125.

The contact caused significant damage to the #9 Fusion, and while only dopping two laps initially, a wounded fuel filler proved costly.

At the end of the race, Ambrose was 13 laps down in 29th position, and left to rue the incident with the #66 Toyota.

“I was a victim –  I don’t know what McDowell was thinking,” said Ambrose.

“I got stuck on the outside and lost 20 positions just trying to get to the bottom and he just jacked me up and put me in the fence around lap 100.

“We weren’t even a fifth of the way through and it was uncalled for and unfortunate for us.  It made for a very long day.”

The seaosn continues next weekend at Texas Motor Speedway with the Samsung Mobile 500.