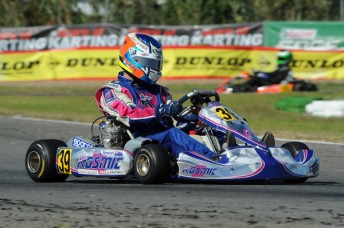 Jake Spencer on his way to the first win of his career in the Pro Light (KF1) category. Pic: AF Images

Jake Spencer and Jake Klarich broken through for their maiden victories in the CIK Stars of Karting Series presented by Castrol EDGE in South Australia today.

Competing in the Pro Light (KF1) category Spencer was victorious in both 34-lap finals at the Bolivar Raceway ahead of a fast finishing Matthew Waters.

“I came here not expecting too much, hopefully a podium, to walk away with a round win and the championship lead is awesome,” said Spencer.

“It is the toughest field I’ve ever raced in so it is good to come out on top.”

While pleased to have claimed the win, Spencer’s run to the top step of the podium was far from straight-forward with the 19 year-old having to fend off challenges from series front-runners Cian Fothergill and Adam Hughes mid-race.

After they both failed to finish the opening final the pair were charging their way to the front from the 20th and 18th grid positions respectively. Hughes hit the front at the end of the main straight on lap 24 but his time at the front was short-lived.

Spencer fought back on the next corner and Fothergill followed, however, the defending champion and Hughes came together which sent them both into a spin. Fothergill was able to continue – Hughes wasn’t so lucky.

Fothergill recovered to cross the line third behind Matthew Waters, however, he weighed in under the minimum weight elevating Tony Kart’s Aidan Wright onto the podium. 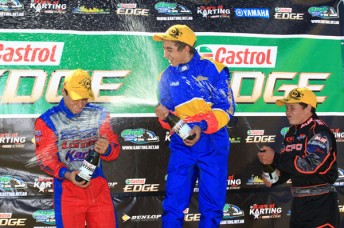 After a number of podium finishes since debuting in the series last year Klarich broke through for his maiden victory in the Pro Junior (KF3) category today.

The 15 year-old made a pass on pole sitter and early race leader Joseph Mawson mid way through today’s second final before holding on for the win.

It was a day to forget for reigning champion Matthew Wall (Sunbury, Vic) with a broken axle dropping him down the order in final one and subsequent engine dramas forcing him out of the second final.

Consistency has earned Kel Treseder the lead in the chase for the John Pizarro trophy (awarded to the Pro Gearbox Champion).

Round three of the CIK Stars of Karting Series presented by Castrol EDGE will be contested in Melbourne on June 17-19.