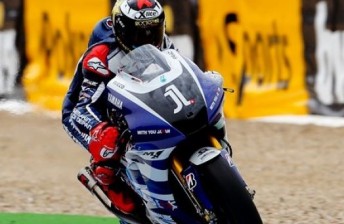 Lorenzo kept his head to win at Jerez

Jorge Lorenzo has taken a popular victory in a wet Spanish Grand Prix after Valentino Rossi and Casey Stoner clashed in the early stages.

Rossi attempted a trademark dive-bomb pass on Stoner into Turn 1 with 20 laps remaining, and subsequently lost the front-end of his Ducati.

The sliding GP11 took down Stoner, whose fury was compounded by trackside marshals that rushed to help the Italian rider. The #27 bike did not rejoin the race.

The reigning World Champion controlled the duration to win by 19.3s from Dani Pedrosa, Nicky Hayden, Hiroshi Aoyama and a recovering Rossi.

The nine-time World Champion benefited from several crashes in the final laps, with Ben Spies falling while battling Pedrosa for second with three laps remaining, and Colin Edwards throwing away a podium with his own error on the final tour.

At the completion of the race, Rossi visited the Repsol Honda garage to apologise to Stoner, who cheekily responded with the comment “obviously your ambition outweighed your talent” through a somewhat forced smile.

Briton Cal Crutchlow ran fifth before falling with seven to go, while a furious Randy de Puniet had crashed out of the top 10 three laps earlier.

The chaos left Hector Barbera to take sixth, ahead of Karel Abraham, who had his own fall in the closing stages, Crutchlow, Toni Elias and the returning John Hopkins.

For the second year in a row, Lorenzo’s victory celebration was far from flawless – the Spaniard slipping awkwardly as he jumped into the circuit’s infield pond, made famous last year when the Yamaha rider struggled to stay afloat due to the weight of his leathers.

Lorenzo now leads the points standings after two races on 45 points, ahead of Pedrosa (36) and Stoner (25).