Reed and Stewart in controversial clash

Reed and Stewart in controversial clash 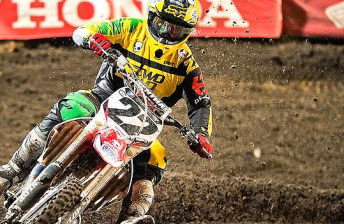 Reed, riding his TwoTwo Motorsports Honda, clashed with Stewart on lap eight of the main event.

The impact sent Reed through a berm and over the handlebars of his Honda CRF450. He remounted and re-joined the race to finish eighth.

“That was a tough night tonight, but we can’t dwell on what might have been. We have to move forward,” Reed said.

“I am pretty sore and cut up from the foot peg and I am now six points behind Ryan (Villapoto) in the championship but it could have been a lot worse. Two races ago I was 29 points behind.

“We have four races to go and 100 points up for grabs. I need to stay on my A-game and keep focused on the big picture,” he added.

Tonight’s result sees Reed slip one spot to sit second in the championship order and six points behind Ryan Villapoto.

There are four rounds of the Monster Energy AMA Supercross, remaining and St Louis’ Edward Jones Dome will host the next race on Saturday 9th April.