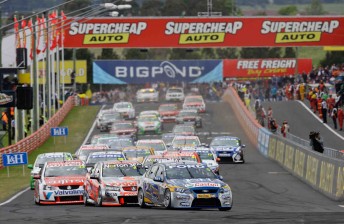 The Seven Network’s award-winning coverage of the Supercheap Auto Bathurst 1000 has not been nominated for a TV Week Logies Award this year.

‘The Great Race’ is generally a guaranteed nominee for the ‘Most outstanding sports coverage’ category, but this year, the V8 Supercars will not be in contention.

The coverage of the Bathurst 1000 is produced by V8 Supercars Television in conjunction with the Seven Network.

Nominees for the 53rd Annual TV Week Logie Awards were announced this afternoon at The Green Room at Quay, in The Rocks, New South Wales.

The Logie Awards will be held on Sunday, May 1, in Melbourne.