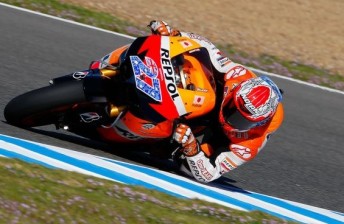 Casey Stoner will start from pole in Spain

The Australian was one of many to fall during the 60 minutes – heading straight on through the Turn 1 gravel trap before coming to rest in the barriers as the session ended.

Stoner’s best time of 1:38.76s left him 0.16s ahead of team-mate Dani Pedrosa, who pipped his countryman Jorge Lorenzo for second in the dying seconds.

Stoner struggled to find a balance early in the session on the hard tyres, but moved to the top of the times with 10 minutes to go and was never headed from there.

“The conditions have been tough all weekend,” said Stoner after the session

“From morning to afternoon it’s completely different, and the wind is making it quite difficult.

“It’s making us push the front more than we’d like to, but the conditions are the same for everyone.

“There is a chance that this wind could pick up tomorrow and bring in some rain, which would be interesting.”

The Australian was uninjured in his minor late-session off, and joked about it afterward.

“We were pretty lucky to pull that one up, but we ended up playing in the sandpit for a bit,” he said.

Valentino Rossi had been the first to fall, losing the front end of his Ducati inside the first 15 minutes.

The Italian was uninjured despite tumbling through the gravel, and later rejoined on the spare #46 bike – ending the session 12th.

Hiroshi Aoyama (Gresini Honda) and Karel Abraham (Cardion Ducati) also fell in the first half-hour, with the Japanese left to nurse a sore left knee after he was clipped by his own bike.

Ben Spies and Colin Edwards fell in the final five minutes, with the two Americans set to start fourth and eighth respectively.

Leading Ducati rider Randy de Puniet bowed out eight minutes early when he lost control of his Pramac entry, and will start seventh behind the Hondas of Marco Simoncelli and Andrea Dovisioso.