Lago to the fore on first day of Nationals

Lago to the fore on first day of Nationals 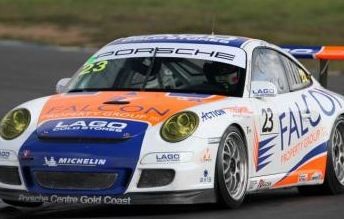 Reigning Porsche GT3 Cup Challenge series winner Roger Lago will enter the second day of the 2011 season at the top of the points standings after taking out Race 1 at Wakefield Park.

Lago, who clinched the 2010 crown in a shock final round that saw rival Matt Kingsley crash out of the weekend in qualifying, controlled Race 1 from start-to-finish, leading home Jeff Bobik, Yeuy Tan, Brad Rankin and John Morriss.

It was another disaster for pole-sitter Kingsley, who was forced to pull off the circuit on the warm-up lap with a fuel pump issue.

“Obviously Matt pulling over to the side of the road before the start wasn’t fantastic for him, but it gave me the front row to myself,” said Lago.

“I just wanted to get a good start, which I did. After that I just put my head down and saw if I could pull a gap on the field, and I did that.

“I took it easy for the last five laps and I’ll see how I’ll go in the morning. All in all, it was a good day. 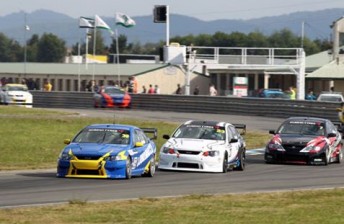 “The car feels great. There will be much of the same tomorrow with a bit of luck.”

The Kumho V8 Touring Car Series also kicked off its season at the Goulburn venue, with category stalwart Terry Wyhoon continuing to prove the benchmark despite an influx of new competitors.

Wyhoon found himself under early pressure from Tony Evangelou in the race, before the reigning series winner dropped to the back of the field with a mechanical issue.

Chris Berry dropped from the front-row to sixth in a shocking opening lap, but recovered to take fourth, one place ahead of Paul Pennisi. The Radical Australia Cup also featured on Day 1 of the Shannons Nationals program, with the British sportscars contesting a pair of 12 lap sprint races ahead of a longer 50 minute event on Sunday.

Tim Berryman took out the opener from Peter Opie, who had a fraught race that included two minor off-track excursions.

Matt Hayes emerged fastest from Marcus Zukanovic and Josh Hughes in the Commodore Cup, after a day that consisted of three practice sessions.

A ‘chook lotto’ draw was held to determine the grid for Race 1, with five-time title holder Geoff Emery scoring pole, from Chris Stevenson and Hayes.

Sunday’s racing action from the Shannons Nationals will be broadcast live over the internet via http://www.itvlive.com.au.