John Martin turns back the clock

John Martin turns back the clock 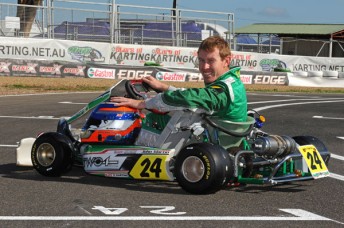 John Martin is making a return to the CIK Stars of Karting Series presented by Catrol EDGE this weekend. Pic: AF Images

Australian Superleague Formula driver John Martin is keeping sharp during the European Winter by returning to the CIK Stars of Karting Series presented by Castrol EDGE in Adelaide, South Australia this weekend.

Martin, who drives for the Beijing Guoan FC outfit in the Superleague Formula, was a strong performer in the series during the formative years of his career securing numerous podium finishes early last decade in the Intercontinental A category.

With his last start at the top level of Australian karting coming some eight years ago, Martin took some time to adapt to the characteristics of the KF1 specification engine used in the Pro Light (KF1) category. As a result he finished just outside the top ten in the 23-kart field aboard a Tony Kart prepared by Two 4 Tuning during practice yesterday.

“Karting has changed quite a bit over the past eight years (when Martin last competed at the top level of karting) with new engines that require a very different driving style,” said Martin.

“I’m getting there slowly and with more laps under my belt during the heat races I’m hopeful of being somewhere up near the pointy end by the end of the weekend.”

Like all drivers, Martin is keen to win every time he gets behind the wheel but this weekend is as much about having a good time as it is to gain a top result.

“For me, this weekend is as much about having a good time with some good friends of mine while keeping sharp and right now both goals are being achieved,” said Martin.

The 26 year-old will jet out of Australia in two weeks time to begin his preparations ahead of the first round in the Superleague Formula Championship to be held at Estoril in Portugal.