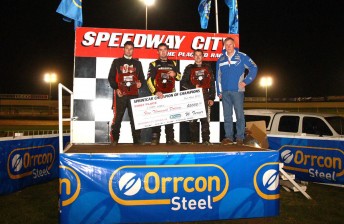 Lines and Farr were clearly the class of the field throughout the evening among the 25 sprintcar drivers from all over Australia. With a big contingent from Orrcon Steel on hand, Farr could be considered unlucky not to have one.

“It’s one that got away,” he said. “The car was so fast, but we just didn’t have the luck with us. It would have been nice to have won, but that’s how it goes.”

Farr’s East Coast Pipelines team switched from Eagle to Maxim Chassis for this weekend and had to change a motor between heat one and two, then a magneto before the dash and finally had a radius rod fail in the dash itself. Ironically, the same problem halted their run in the Final.

Lines – in the Luch Monte owned machine – took his second straight Orrcon Steel Champion of Champions, which adds to his tally of bigwins after taking the Grand Annual Sprintcar Classic back in January.

“It was bad luck for Robbie but we’ll take it,” Lines said. “We’ve had pace all year, we’ve just been looking to string it together. We got the Classic win and now this – most pleasing is that we won this race last year, so to back it up is nice.”

The event was marred by a number of big crashes. Early in the night Chad Ely tore his machine up, whilst David Murcott crashed the Darryl Downing car twice, including a massive roll heading into turn three on the first start.

After taking four attempts at getting underway, the race finally settled down with Farr at the front. A mid-race caution stabilised the field, before Farr carried on, ultimately succumbing to the front end problem.