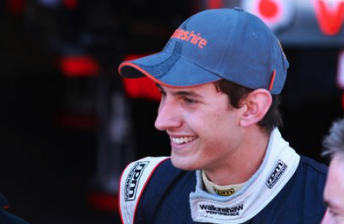 Nick Percat has been named as a sports ambassador for commercial finance and leasing company Morris Finance.

Percat, currently leading the Fujitsu V8 Supercars Series, has secured the endorsement from the Geelong-based company where he will be one of its sports ambassadors to connect, support and enable people in the community.

“Morris Finance has great sporting and community programs and I’m really excited to work with them in my sports ambassador role,” Percat said.

“Motor racing is a team sport both on and off the track, and I’m really grateful to have its support for the rest of this season.”

Morris Finance Managing Director Nathan Murray said he is a perfect fit for the brand.

“Nick is hard working and extremely dedicated in the pursuit of his motor racing career,” said Murray.

“His professional attitude and commitment to success in his chosen sport reflect similar principles to Morris Finance.”

The next round of the Fujitsu V8 Series will be held at Barbagallo Raceway from April 29-May 1.