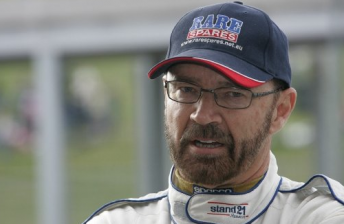 Reported today, the Tasmanian V8 event is in jeopardy after it was revealed that the government is looking at shifting its funds for the Symmons Plains round to inject cash into AFL team the North Melbourne Football Club. CLICK HERE for Speedcafe.com’s earlier story.

The funds, estimated at over $500,000, would be used to give North Melbourne two games each year at Hobart’s Bellerive Oval.

The Tasmanian government is already involved in the AFL through its naming rights support of the Hawthorn Football Club.

During last year’s V8 Supercars event at Symmons Plains, then-premier David Bartlett announced the government had re-signed a $1.7 million deal to host the V8s until 2013. It has since been revealed that the taxpayer support could end after this year’s race meeting  – the 12th event on the calendar (November 11-13).

Former Touring Car champion Bowe is bemused that the government is considering dropping its support of the V8 Supercars Championship.

“Per capita, Tasmania is the best supported V8 Supercars race in the series,” Bowe told Speedcafe.com.

“Tasmania doesn’t have a big population, but the place is always bursting at the seams. Tasmania has a massive motorsports following, so the government will pull the support of this event at its own peril.

“If they don’t support it, they won’t get re-elected, that’s my take.

“I’m really shocked, to be honest that this is really on the radar. I’ve never had any time for politicians, and I’ve got even less time now.”

If Symmons Plains does drop off the V8 Supercars calendar, it would not be the first time. Tasmania missed a round of the series for four years (2000-2003) when the lack of state funding and inadequate track facilities forced V8s to stay away.

Since then, the circuit has been resurfaced and had a major paddock upgrade.

“The last time V8 Supercars didn’t go there had merit, because the track needed an upgrade,” Bowe said.

“That was 10 years ago so some people might forget that.

“The facilities are as good as many, many places that the series goes to, and better than some. I wouldn’t have thought there was any issue at all.”

Bowe says that losing the V8s to Tassie would be a disaster for the state’s massive racing fan base.

“I would think they would jettison at their own peril,” he said.

“Tassie has an incredible motorsport culture, and a major part of that is V8 Supercars event at Symmons Plains. The state also has Targa Tasmania, there’s the Longford Revival on this weekend. The state is full of motoring and motorsport enthusiasts – more so than anywhere else.”