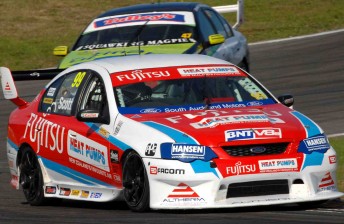 NZV8 title contender Kayne Scott has been completely stripped of his championship points due to a technical infringement.

The Hamilton-based driver has been excluded from the results of Rounds 1 to 6 of the BNT V8s Championship after an infringement regarding the engine cylinder heads on his Ford Falcon.

Scott’s team has advised officials that it intends to protest the decision.

The penalty drops Fujitsu-backed Scott from second to last place. He was just seven points adrift of championship points leader Angus Fogg ahead of the season finale at the Hamilton street track in two weeks time.

Fogg now goes into the final round with a 32 point lead ahead of Queensland-based Kiwi driver Craig Baird with Nelson’s John McIntyre just a further 12 points behind.

The final round of the championship will take place at Hamilton’s ITM 400 V8 Supercar (April 15-17).

Revised Championship points after Round 6: