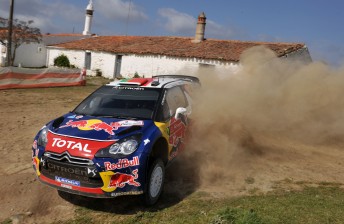 Driving a Citroen DS3 WRC, Ogier and co-driver Julien Ingrassia produced an error-free performance to land their second successive triumph on the demanding gravel stages of the Algarve.

“I’m very happy, we had the perfect weekend, the car was perfect and Julien was perfect,” said Ogier.

“I would like to dedicate this victory to all the team who prepared a perfect car. They showed trust in me since the start of the season and following my mistake in Mexico. It is the best way to come back.

“It is a long way to go in the championship but I’m in a better position.”

Ogier’s team-mate, the seven-time world champion Sebastien Loeb, won the Power Stage to cement second overall. The three points he scored for winning the final run, combined with his 18 points for finishing second, means the 37-year-old Frenchman is now equal on points with Ford’s Mikko Hirvonen at the top of the drivers’ standings after three rounds.

Hirvonen finished fourth overall behind Ford team-mate Jari-Matti Latvala after being delayed on Sunday morning by a broken driveshaft. He was also slowed in the closing section of the Power Stage with a suspected rear damper problem.

Latvala’s third-place means he has now finished on the podium on the opening three events of the year.

Matthew Wilson started the final loop of stages in fourth place but couldn’t prevent Hirvonen from overtaking him on the rain-hit penultimate stage. He admitted he crawled through stage 17 to secure an impressive fifth overall in his M-Sport Stobart Ford Fiesta RS WRC.

Petter Solberg started day three in ninth position but wins on stages 15 and 16 hauled him back to within touching distance of sixth-placed Kimi Raikkonen heading into the Power Stage. Although he was unable to bag a third-straight win on the test, he did manage to overhaul Raikkonen, in a similar DS3 WRC, for sixth spot.

“I knew Petter would push like hell [on the last stage] but it was okay,” said Raikkonn.

“We learned a lot with this car on this rally after just a little test. We improved the car, now we have to pick up the speed a bit.”

Henning Solberg started Sunday’s opening stage in sixth overall but fell back when his Fiesta suffered a turbo boost problem on the penultimate stage. Fearing he might delay Hirvonen on the Power Stage (the Finn was running behind him after the running order was reversed for the last two stages), Solberg lost more time when he stopped to wait for Hirvonen to pass. He settled for ninth.