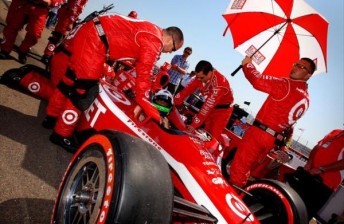 Power was unable to make use of his pole position for the race, as Franchitti was clearly the class of the field on the street course layout.

“You see how close the field is, so every point matters,” said Franchitti, who tied three-time Indianapolis 500 champion Johnny Rutherford for 10th on the Indy car list with 27 victories.

“This is a great championship, with a lot of quality teams and drivers. So you’ve got to fight all the way, and that’s exactly what this team does time after time. The key to our race was making the outside pass on Will on the second re-start.

“When I got a gap I was able to kind of control it; not abuse the tires too badly. I wanted to save something for the end just in case there was a last, three-laps-to-go restart or something. The car was running like a dream. It’s a great time to be an IndyCar driver, the series is on the ‘up’ and this will be a fantastic season.”

The Toowoomba driver was pressured throughout the race by Kanaan, who was only confirmed in this year’s IndyCar Series six days prior to the race weekend. Power was able to hold on throughout the race, including a head-to-head race at the final round of pit stops. 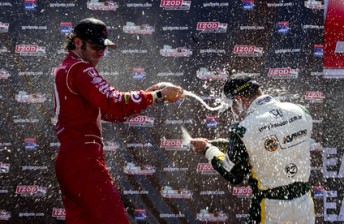 “Shortly after he passed me, someone hit me from behind. That damage took a bit of downforce off the car and it took a while to work our way back up to second, with some great pit stops from the team. But Dario was untouchable, so we’ll take a solid second as a good start to our season.”

“I took the green and had a good run going on the inside of (Ryan) Briscoe and then Helio (Castroneves) misjudged his breaking point and ran up into the back of me,” said Andretti.

“It was all a chain of events from there. I think having the cars start so close together is great for the fans but it was no good for me today.”