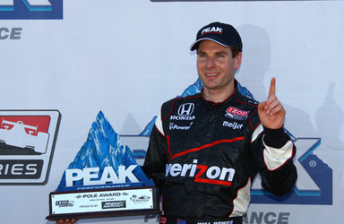 Will Power collected the pole at St Petersburg

Will Power has opened his 2011 IZOD IndyCar season in style, scoring pole for the opening race of the season at the Honda Grand Prix of St. Petersburg.

The Australian was pleased to get his season off to a solid start.

“The Verizon Team Penske guys are starting with the pole again and you know where the race it going to be tomorrow. It’s going to be double-file restarts and a lot of mayhem.”

Four teams are represented on the first three rows for the 100-lap race on the 1.8-mile, 14-turn circuit.

Reigning series champion Dario Franchitti, who hasn’t won at St Pete in the seven years of the event, will start second in the #10 Target Chip Ganassi Racing car (1:02.2953), while team-mate Scott Dixon took third place ahead of Andretti Autosport’s Mike Conway in the #27 Team GoDaddy car.

Ryan Briscoe, who won the race in 2009, and Justin Wilson will start the race on the third row of the grid.

In Firestone Indy Lights, Esteban Guerrieri became the eighth driver to earn the Sunoco Pole Award in their debut race.