Vettel not getting carried away with victory

Vettel not getting carried away with victory 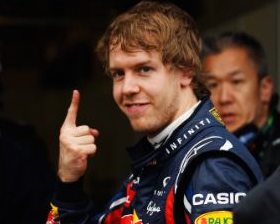 The German was in dominant form this weekend, scoring pole by 0.8s on Saturday before controlling today’s race from the start.

“It is a long long season,” said Vettel.

“I keep saying to the team that we have to keep our feet on the floor.

“It was a very good race today, obviously a lot of points which is very important, and we enjoyed ourselves – which is even more important!

“But it’s a long year, a lot of things can happen, and this is a special track so we have to stay focussed for the next one, and then the next one after that.

“Step by step, we’ll try and keep on doing what we are doing now – enjoying and working hard.

“I think it will be very close sooner or later.”

Vettel also paid tribute to tyre supplier Pirelli, after the degradation levels of the Italian tyres had been the talk of pre-season testing.

“We have to make some compliments to Pirelli,” said Vettel.

“Obviously after the tests, we were all a bit scared coming here.

“We didn’t see as many stops as expected, and all in all I think it was a smooth race.”