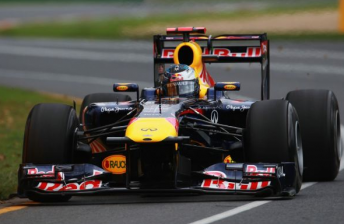 Sebastian Vettel has won the opening round of the 2011 Formula One World Championship at Albert Park in dominant fashion.

The Red Bull Racing driver led away from pole position and controlled the gap to eventual second place finisher Lewis Hamilton for the duration of the race.

Mark Webber ended up fifth after running a three-stop strategy – one more than Vettel and Hamilton.

Webber was the only front-runner to finish the race on the soft tyre, but could not find a way around the Ferrari in the closing stages.

The Australian had fallen behind the Spaniard during during his third pitstop – which included a sticky right-front wheel, and a minor off at Turn 3 on his out-lap. Alonso ran just one lap longer before pitting and leap-frogged the Red Bull driver.

Vitaly Petrov took a tremendous podium for Renault, overcoming Alonso and Webber with a two-stop strategy.

Button’s day was ruined early by a drive-through penalty for passing Felipe Massa outside the bounds of the circuit at the Turn 11-12 chicane on Lap 11.

Mercedes also had a fraught race, with Michael Schumacher hit from behind by Jaime Alguersuari at Turn 3 on the opening lap.

The German suffered a puncture and was forced to pit, before eventually retiring on Lap 23.

Team-mate Nico Rosberg was also out before half distance after being the victim of an optimistic move from Rubens Barrichello at Turn 3 on Lap 24. Barrichello had also been off at the right-hander on the opening lap.

Perez was the only driver to complete just one pitstop during the race to score points on debut, with team-mate Kobayashi’s eighth place completing a fine day for Sauber.