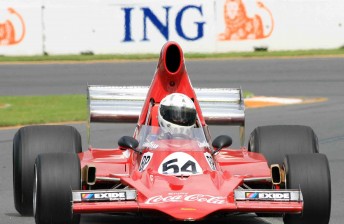 Dwyer was unstoppable at Albert Park

Dwyer cruised to victory ahead of Andrew Robson (Lola T332) in today’s final race, with the pair of Lolas crossing the finish line six seconds apart.

“To come away from Albert Park with pole position and two wins is just brilliant – these types of outings are rare for car drivers,” said Dwyer.

“And to win in front of such a huge crowd today is a great feeling, so I have plenty to celebrate.”

Robson was forced to fight through the field today after a DNF in Race 1.

Greg Mills (Sana RD11) and Chris Hocking (Matich A53) both walked away from a spectacular incident at Turn 9, while the McRae GM1s of Chris Lambden, Stuart Lush and Aaron Burson were eliminated in a start-line incident.