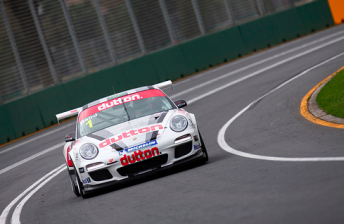 Craig Baird set the pace in the Carrera Cup

Series favourite Craig Baird has wrapped up the opening round of the reborn Porsche Carrera Cup Australia Championship at Albert Park.

The Kiwi made it two wins from three starts as he controlled a processional final race.

Gaunt and Richards ended the weekend tied for second overall on 144 points, ahead of Reid, Barker and Max Twigg.