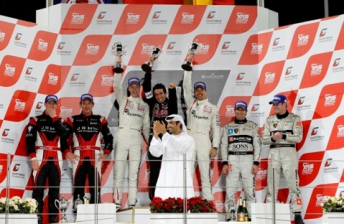 The Hexis Aston Martin team scored a tight victory over the lead Sumo Nissan GT-R as Australian David Brabham made his debut in the GT1 World Championship in Abu Dhabi.

The opening round of the 2011 season saw Brabham finish eighth and 10th in the two races alongside Briton Jamie Campbell Walter in the second of the Sumo Power Nissan GT-R entries.

In the points-weighted Race 2, Hexis drivers Stef Dusseldorp and Clivio Piccione jumped from fifth into a seven second lead in the pitstop cycle.

Dusseldorp then held off a charging Peter Dumbreck and Richard Westbrook Nissan to take the win.

“I have no words to say, except that the team made this possible,” said Dusseldorp.

“We did a great pit stop in the first race and now the team did the same job and out me in first.

“All I had to do was finish the race, which wasn’t as easy as it sounds because of the Nissan so it feels incredible.

“I have good memories from Zolder (the next round), so hopefully we can have a repeat performance there.”