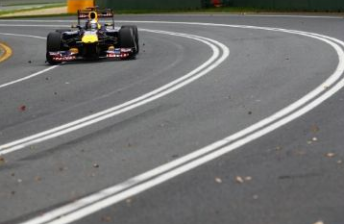 Vettel is the overwhelming favourite for pole

Red Bull Racing has confirmed its favouritism for this afternoon’s qualifying at Albert Park, with Sebastian Vettel and Mark Webber finishing one-two in Practice 3.

Vettel ended the session over 0.8s quicker than his team-mate, while Lewis Hamilton was third in the McLaren – over a second adrift of Vettel.

Jenson Button matched his team-mate’s time to be fourth, while Vitaly Petrov rounded out the top five in the Renault entry.

Both HRT entries ventured onto the circuit during Practice 3, with Narain Karthikeyan 17 seconds off the pace after completing five laps.

Team-mate Tonio Liuzzi faired worse, stopping at Turn 4 on his out-lap with a mechanical issue.

Qualifying will be held at 17:00 this evening.