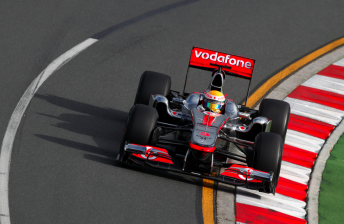 Lewis Hamilton will start the season's opening race from P2

The 2008 World Champion knocked Mark Webber from the front-row of the grid with an impressive final lap, despite his KERS failing to work in Q3.

After a tough winter test period, McLaren had been encouraged by its form in Friday practice, and showed up the more highly fancied Ferraris in qualifying today.

“It’s absolutely surreal to be up here today,” said Hamilton.

“The guys back at the factory have done an unbelievable job.

“Of course we still have a lot of work to do, but I think we’ve really got ourselves on the right track, and it’s a great foundation for us to build on.

Hamilton’s team-mate Jenson Button will start tomorrow’s race fourth, a position from which he believes he can win his third straight Lex Davison Trophy.

“Sebastian (Vettel) put on a very good lap but we don’t know what their race pace is going to be like. We have to be positive and think we can win.”