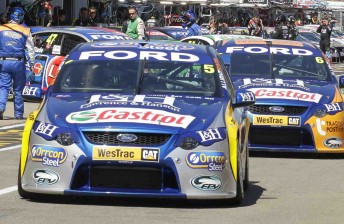 FPR's duo of Mark Winterbottom and Will Davison

Ford Performance Racing could debut the first of its brand-new cars as early as Perth or Winton rounds of the V8 Supercars Championship.

The factory Ford team is close to finishing the build of its latest weapon, with a second Falcon not far behind on the production line.

It has not yet been decided who will get the first new car – Orrcon Steel’s Mark Winterbottom or Trading Post’s Will Davison.

Edwards told Speedcafe.com that the first of the new cars could been seen as early as Perth’s May 6-8 race meeting.

“The new shell is just about finished,” Edwards confirmed.

“It will go into the paint shop in the next few days but we’re yet to confirm when we’re going to debut it. The important thing was that we needed to get a spare car in our workshop. We’ll make a decision over the next week or two about when we’ll race it.

“Perth or Winton is a possibility. We don’t want to give it its first run at a street track, but as I say, we haven’t decided, we haven’t had our internal meeting.”

With a second car close behind in production, Edwards says that it is highly unlikely that they will roll both new cars at the same event.

“There’s another one hot on its heels,” he said.

“Resources don’t allow you to build and debut two new cars at the same time, but I can’t imagine that it will be too far after.”

As reported previously, the implementation of two new cars will give the team a spare car, as well as the chance to run a car in selected events of the Fujitsu V8 Series for the team’s endurance drivers Steve Richards (Orrcon Steel), Luke Youlden (Trading Post) and Dean Canto (The Bottle-O).