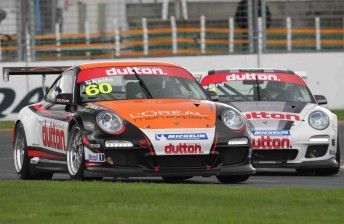 Craig Baird has taken his first win of the 2011 Porsche Carrera Cup Championship, winning Race 2 at the Albert Park circuit.

The Kiwi blasted yesterday’s race winner Jonny Reid off the line and raced on to a comfortable victory.

Reid looked just as comfortable in second place until he lost drive on the final lap, dropping to sixth place.

British driver Ben Barker could have trumped both Gaunt and Richards, as he was running second on the final lap after passing the stricken Reid. However, he ran wide on the second last corner, ruining what could have been a debut podium. He finished fourth ahead of Mark Skaife.

Yesterday’s crash victim Michael Patrizi passed 10 cars on the first lap, eventually taking ninth place. He was eighth but lost a spot to Matt Coleman on the final lap after a slow last lap.