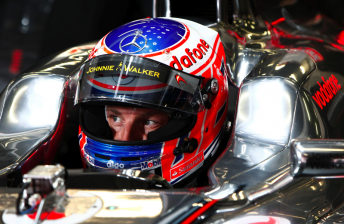 Fernando Alonso was best of the rest in third, ahead of the Red Bull Racing entries of Sebastian Vettel and Mark Webber.

Vodafone McLaren Mercedes team principal said he was encouraged by the day’s running.

“I think it’s been a solid day,” said Whitmarsh.

“Our cars have been reliable – we’ve run a brand new floor and exhaust.

“Everything has went with our expectations, so it’s been an encouraging day.

“But Friday doesn’t carry any points, and I think we’re yet to see the best of Red Bull.

The HRT entries again failed to complete a flying lap, with an installation lap from Tonio Liuzzi the only running the new F111 has completed.