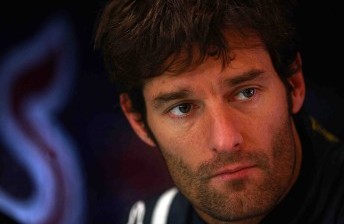 Red Bull Racing has dominated the first practice session of the 2011 Formula One season.

The lap edged team-mate Sebastian Vettel from the top spot by 0.3s, while Fernando Alonso, Nico Rosberg and Rubens Barrichello rounded out the top five.

Webber’s time was almost a second faster than Alonso’s best, with the Red Bull proving superior to the Ferrari in the final sector alone by 0.6s.

The 90 minute session began with a bang, as Team Lotus test driver Karun Chandhok crashed into the Turn 3 exit wall on his out-lap.

HRT’s new F111 has yet to turn a lap, with neither Narain Karthikeyan nor Tonio Liuzzi venturing onto the circuit during the session.

Timo Glock lost time during the session with a gearbox issue. Both Virgin Racing entries were outside the 107% qualifying cut-off by the end of  the session.

For a comprehensive preview of the opening round of the 2011 FIA Formula One World Championship, CLICK HERE for Speedcafe.com’s Race Guide.