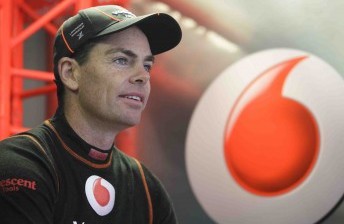 Craig Lowndes will start from pole this evening

Lowndes was the fourth man out in the Top 10 Shootout, and set a 1:57.7s lap to knock Shane van Gisbergen off of the top spot.

“It was a good clean lap,” said Lowndes.

“I don’t think anyone in that top 10 had a new tyre to use, so really we just had to do the best we could.

“I think everyone was trying to attack corners too much and the grip level just wasn’t there on the exits.

“I’ve been doing that all weekend, so I changed my plan and concentrated on getting good, clean exits, especially out of Turns 1, 2 and the back chicane.

“It’s great to have both Vodafone cars on top. Jamie is fantastic in the top 10 shootouts, and he was 0.15s up in the first sector, but lost a little bit from there.

“It’s non-championship, so we can afford to have a play and see what we can do – but I think the boss wants us to get serious now for tonight’s race.”

Whincup will start alongside Lowndes on the front-row, ahead of van Gisbergen, Tim Slade and Jason Richards.

The Falcons of Will Davison, Alex Davison and Mark Winterbottom fill sixth through eighth, ahead of Rick Kelly and Jono Webb.