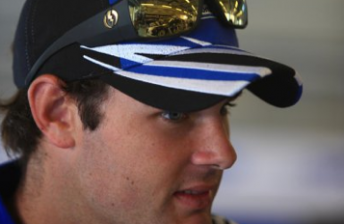 The SP Tools Falcon driver completed the unique ‘lottery draw’ at the end of the session – randomly selecting a table tennis ball sporting the number eight, indicating that the top eight qualifiers will be reversed before tomorrow’s shootout.

The draw therefore has only affected the order of the shootout, with the fastest 10 qualifiers all set to compete in the one-lap session.

Van Gisbergen emerged on top at the completion of qualifying after a late red flag left the field with just three minutes to better Craig Lowndes’s 1:57.7s benchmark.

The SP Tools Falcon driver put in a stunning 1:57.2s final effort to take the top spot, while Lowndes looked on from the pit garage.

Practice 2 fast-man Jamie Whincup ended the session down in sixth, after an off at the fast Turn 11-12 chicane on his final run.

The session’s red flag was caused by Todd Kelly spinning into the Turn 9 gravel trap with six minutes remaining.