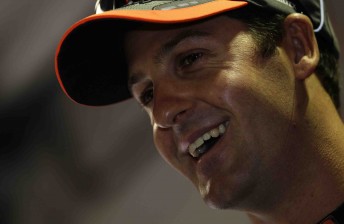 Jamie Whincup has emerged fastest from Practice 2 at Albert Park.

The Clipsal 500 winner’s best time of 1:58.4s put the TeamVodafone Commodore over 0.1s clear of Garth Tander, with Jason Richards, Tim Slade and Mark Winterbottom rounding out the top five.

Several runners started the session on wet tyres, before quickly moving to slicks as strong winds helped dry the circuit.

At the completion of the half-hour session, Lee Holdsworth, Jason Bright, Craig Lowndes, James Courtney and Rick Kelly rounded out the top 10.

Several drivers had offs during the session as they explored the ever increasing grip levels.

The biggest incident of the session occurred in the opening 10 minutes, when Whincup spun wildly at Turn 13 after running wide over the wet exit curbing. The TeamVodafone Commodore emerged undamaged from the spin.

Dean Fiore was also in trouble, making minor contact with the tyre wall on the outside of Turn 5 in the dying moments.

The V8 Supercars return to the track for qualifying at 18:30.

CLICK HERE for report and lap times from Practice 1.