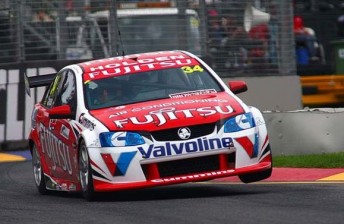 All was not right with the #34 Commodore in Adelaide

The Fujitsu Racing driver found himself languishing in 16th and 21st on Saturday and Sunday respectively in Adelaide, as he struggled with a fundamental front-end issue with his #34 Commodore.

The 27-year-old expected to be a contender at the Clipsal 500, continuing the strong form that the two Garry Rogers Motorsport entries have shown on street circuits over recent seasons.

“It was quite embarrassing on the weekend to be battling around the back of the field when we’re known to be front-runners at these type of events,” Caruso told Speedcafe.com.

“It’s a missed opportunity. To enter the round sixth in the championship and now be back in 14th is just not good enough.”