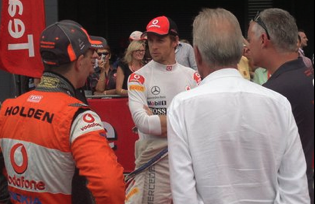 Jenson Button is the fastest-ever man to lap the famous Mount Panorama circuit after the former Formula One world champion completed his first laps around Bathurst in the Vodafone driver swap.

Button was recorded at doing a 1m48s lap around the Mount Panorama circuit.

While this lap will not be recorded as an ‘official’ lap record, it is easily the fastest time a race car has ever travelled around the 6.213km circuit.

Button’s sub 2 minute time is significantly faster than the previous best – set by Craig Lowndes during last year’s final practice session where he set a 2:06.8012s – beating Greg Murphy’s long-standing ‘Lap of the Gods’ time from 2003.

Lowndes will soon get his chance in the McLaren Mercedes at Bathurst before both drivers sample the track in a TeamVodafone Commodore VE.