SoK to be presented by Castrol EDGE

SoK to be presented by Castrol EDGE 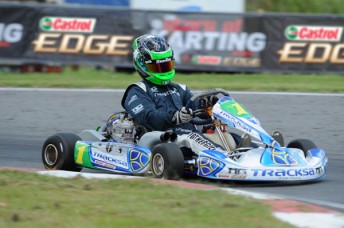 Today's announcement is somewhat of a homecoming to karting for Castrol

One of the world’s leading oil and lubricant manufacturers, Castrol, has announced today that it has joined as the presenting partner of the CIK Stars of Karting Series with its Castrol EDGE brand.

The announcement provides Australian karting with genuine corporate support from outside of the karting industry for the first time in almost a decade – not since the Ford Kart Stars has Australian karting had a partnership with such a blue-chip company.

Castrol’s partnership with the CIK Stars of Karting Series is somewhat of a homecoming for the oil and lubricant manufacturer having been involved in Australian karting at the top level during the 1980s and 90s through the sponsorship of the Castrol Grand Prix at Oran Park.

Castrol was also a long-time supporter of the DAP team and Jim Morton-led Tony Kart team during the 1990s in which current V8 Supercar driver James Courtney was a part of on his way to winning dual World Karting Championships.

“Karting is the place where not only the future stars are made but also where lifelong associations are developed,” said Castrol Sponsorship Manager Sue Dilger.

“When Castrol was previously involved in karting the people in the sport were very brand loyal and this is something that we have recognised once again from the CIK Stars of Karting Series. “For the past 18 months I’ve been watching the series grow and keeping an eye on it from a distance and the team at Castrol are delighted to become the presenting partner for the remainder of 2011. I hope that this can be the rebirth of a longstanding relationship by Castrol with the top level of karting in Australia.”

Reigning Pro Gearbox (KZ2) Champion Matthew Wall has seen a number of major companies involved in karting during his time in the sport but this latest announcement has got him excited.

“To have such a well recognised name in the motoring world as a partner will certainly make it more appealing to people outside of the karting fraternity,” said Wall.

“I was fortunate to be involved in karting when Wynns and Ford were involved in the sport through their various series’ and it really gave you an extra boost to know that you weren’t just representing your sponsors but the series’ sponsors, who were very reputable companies, as well.

“Castrol have obviously seen the benefits of what karting can do for their brand and I look forward to being a part of an exciting time for the sport and the CIK Stars of Karting Series.”

Round two of the five round series will be contested in South Australia at the Bolivar Raceway on April 2/3.