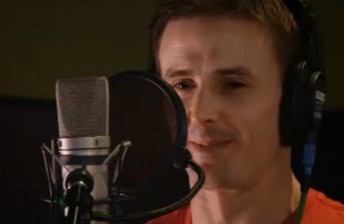 Mark Winterbottom in the studio recording his voice for Cars 2

V8 Supercars driver Mark Winterbottom will have his own character in the upcoming Disney Pixar movie Cars 2.

The story of Cars 2 sees Lighting McQueen invited to compete in the World Grand Prix to race against the fastest cars in the world in three locations – Japan, Italy and the UK.

It’s at the launch party event that our character ‘Frosty’ will meet up with Lighting McQueen as the Australian representative for the big race.

Cars 2 will be into Australian cinemas on June 23.

Winterbottom, who recently became a father for the first time, says that he was thrilled to be involved with the project.

“It was an awesome opportunity that comes along once in a lifetime,” said Winterbottom.

“Seeing the character on the big screen for the first time will be an amazing feeling. I’m a huge fan of the original Cars, it is a movie I’ve watched countless times and I just can’t wait for Cars 2.”

See below for a video with Winterbottom on the making of ‘Frosty’ on Cars 2.