Andrew Thompson to drive V8 at the AGP

Andrew Thompson to drive V8 at the AGP 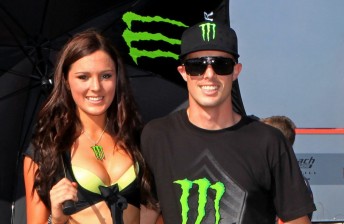 Andrew Thompson with a Monster promotional lady in Adelaide

Andrew Thompson will drive at the Australian Grand Prix, competing in the Ultimate Speed Comparison at the Albert Park circuit this weekend.

Thompson will drive TeamVodafone’s Commodore VE ride car in the speed test, competing against an AMG Mercedez-Benz C63 of Mick Doohan and the McLaren Mercedes Formula One car of Gary Paffett.

Both the Commodore and F1 car will be the machines used in tomorrow’s Vodafone driver swap at Mount Panorama.

After a disappointing Championship Series with Walkinshaw Racing last year, Thompson is a TeamVodafone driver this year, competing in the Fujitsu V8 Supercars Series in his Monster Energy Drink-backed car, as well as team-mate for Jamie Whincup in the V8 endurance races.

TeamVodafone boss Roland Dane agrees that Thompson’s addition to the Grand Prix is a nice feather in ‘Thommo’s’ cap.

“Thommo is a part of the team. Now that we have spent some time with him, it is clear that he was used and abused by some people over the last year or two,” Dane said, referring to his one-year tenure at Walkinshaw Racing.

“He has responded well in a much better environment. Part of being a team is picking out some duties – rides days, sponsorship duties or whether its being able to be at the Grand Prix doing the Speed Comparison.

“We’re very happy for him to be doing it, especially with our own program in race terms, being bigger than ever.

“Therefore, it makes it much more difficult for Jamie or Craig to do it, so we’re happy for him to do it.”

The Ultimate Speed Comparison at the Australian Grand Prix will see all three cars complete one flying lap, with each car leaving the start line at different times.

The comparison will be held once a day over the four day race weekend, starting this Thursday.