Will Davison on pole for Sunday’s Clipsal race

Will Davison on pole for Sunday’s Clipsal race 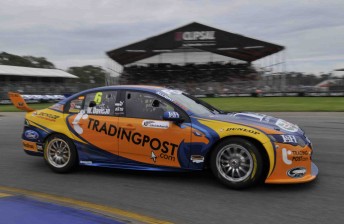 Will Davison has taken pole for Race 4 of the V8 Supercars Championship at the Clipsal 500 today.

Davison’s top spot is his third career pole, his first for FPR and he was elated with the result.

“I’ve been saying, that the car has been a rocketship. It’s been just about me getting me right and getting runs on the board.

“Hopefully this is just a taste of what is to comer.”

Mark Winterbottom will line-up in third place ahead of Lee Holdsworth (Fujitsu Racing).

Yesterday’s winner Garth Tander had continued issues at the final corner, unable to arrest the car affectively. He will start from 13th place.

Today’s second leg of the Clipsal 500 will be held at 2.35pm. Traditional Clipsal 500 regulations mean that the winner of today’s race will be recognised as the official winner of the famous Adelaide street race.