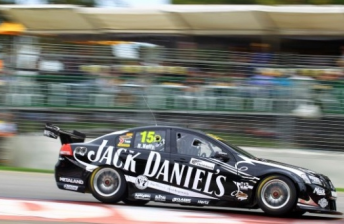 Rick Kelly moves to eighth in points with his Clipsal podium

Rick Kelly has hailed his team’s return to form at the Clipsal 500, which resulted in a second place finish today.

The Jack Daniel’s Commodore driver qualified on the back row of the grid at the previous event in Abu Dhabi, as he struggled to understand a brand new chassis.

The two-time Bathurst winner fought back hard in Adelaide, spending the majority of both races running among the top three.

While a decision to make a third fuel stop left Kelly down in 12th on Saturday, this weekend’s results see Kelly gain ten places to eighth in the championship standings.

“The team has done a great job on focusing where we were headed and not where we have been,” said Kelly after Sunday’s race.

“It’s very easy to throw things around and panic. We’ve had a very clear direction and that’s where we are going.

“From a personal point of view it’s difficult after a tough event and not to lose heart.

“I’m good at bouncing back. Yesterday I was ready to head home and now I want to race again tomorrow!”

Kelly also paid tribute to his brother and team-mate Todd Kelly, who is languishing in 21st position in the championship after an early retirement today.

“His efforts are the reason I am on the podium,” Rick said of his brother, who plays the role of Racing Director at Kelly Racing.

“The decisions he is making in the team are making us stronger and stronger.

“So all of the success I am having he is sharing in.”