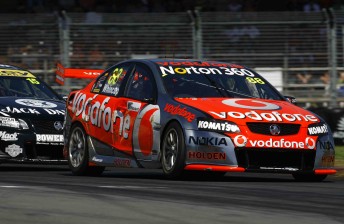 Jamie Whincup has taken a record setting fourth Clipsal 500 victory on a day of mixed weather conditions in Adelaide.

The TeamVodafone driver swapped the lead with Will Davison early in wet conditions, before falling back into the pack as the track dried out.

While several drivers took turns to lead the race, Whincup charged back in the second stint, taking the top spot for good just prior to the second round of stops.

Rick Kelly was a well deserved second at the flag, having led for a large portion of the race.

Mark Winterbottom recovered from an early mistake which dropped him outside the top 10 to take third, ahead of the Holden Racing Team’s James Courtney and Garth Tander.

Yesterday’s winner withstood heavy pressure from Paul Dumbrell in the closing stages, while Will Davison, Steven Johnson, Fabian Coulthard and Alex Davison rounded out the top 10.

The wet opening stint will no doubt be remembered as one of the highlights of the season, with Whincup and Davison falling back into the pack as their wet tyres deteriorated on a drying track.

The Safety Car made its first appearance on Lap 29, just after the first round of pitstops had been completed.

Lee Holdsworth had been the only contender to opt for slicks, and paid the price at Turn 8 on his out lap.

The Safety Car was required again just laps later, with Jason Bright spinning on his own at the Senna Chicane and making heavy contact with the inside tyre wall.

Warren Luff caused the third and final Safety Car on Lap 49 when he crashed at Turn 8, giving teams the opportunity to take their second and final stops.

Whincup’s team-mate Craig Lowndes also had a fraught day, dropping from the top five to outside the top 20 when he picked up a puncture from Bright’s incident halfway through the race.

Lowndes’s race subsequently ruined for good thanks to a pitlane incident that saw the TeamVodafone Commodore released into the path of Greg Murphy in pitlane, resulting in a wild spin at pit exit, and a drive-through-penalty.

Lowndes eventually finished 12th, behind Jonathon Webb, who faded in the final stint after looking a podium contender during the middle of the race.

Joining Turn 8 victims Luff and Holdsworth on the DNF list were Todd Kelly and Jason Bargwanna – the pair colliding at Turn 4 on the second lap of the race, causing significant damage to both cars.

For the second day in a row, the race ran to time rather than distance – with 77 of the 78 laps completed.

Despite the weather, the Clipsal 500 was again well supported by the fans, with an official crowd figure of 270,800 over the four days.