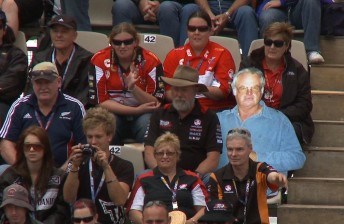 Edward (middle right) with his mates at the Clipsal 500

The Clipsal 500 Adelaide is the most attended event of the V8 Supercars season, and for one group of fans, this year’s race holds has had an extra special meaning.

The group of friends from Kangaroo Island, SA, attended the famous street race without one of their mates – Edward – who passed away in November last year.

Edward was the group’s leader, purchasing their tickets in bulk, ensuring they kept the same seat year after year (and also scoring the discounted race).

When Edward passed away, the group decided that it was only fitting that Edward retain his seat. As a sign of respect to Edward, the friends kept his seat for him, placed a cardboard cut-out in his place.

See below for Speedcafe.com’s video, speaking to Edward’s friends, plus others, at this weekend’s Clipsal 500 Adelaide …