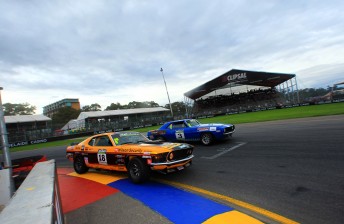 Pole-sitter David Sieders (AIS Ford) was soon overhauled by Ryal Harris (VIP Ford), while Johnson (Doritos Holden) gradually moved his way to the front with a succession of passing moves at Turn 9.

The result gave Flack victory in GT Challenge, ahead of his brother Damien, who gave his Ginetta G50 a strong result on debut.

John Bowe charged through the pack to win the reverse top 10 Race 3 for the Touring Car Masters.

Peter Carr evened the score with rival Kyle Klews in this morning’s fourth and final Aussie Racing Car Series race of the weekend.