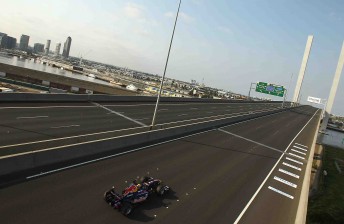 Mark Webber made his grand entrance to Melbourne today, crossing the Bolte Bridge ahead of next weekend’s Formula One Qantas Australian Grand Prix.

Webber travelled at between 80kmh and 100kmh in his Red Bull team’s show car, making his way to the Docklands where Webber spoke to the media and signed autographs for fans.

On the spot was Greg Rust, ONE HD’s main motorsports caller. He wrote for onehd.com.au about his experience at the Docklands …

“I’ve just met up with a colleague who works for a rival TV network. He’s a general sport presenter and journalist with great credibility that I respect. He reckons Mark Webber will win the Australian Grand Prix in a week’s time. The comments follow interviews we both had with Mark this morning after he drove a Red Bull Formula One car over the Bolte Bridge. 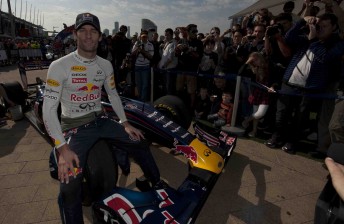 Mark Webber at the Docklands

“Webber looks relaxed and ready for the marathon season that lies ahead. Last year he went ever so close to winning the title but learnt a lot from the experience. For all the disappointment Mark has come back a better sportsman. He’s in the perfect frame of mind for his home race and the championship.

“The drive over the Bolte Bridge looked spectacular with Melbourne turning on the perfect morning. The pictures of his crossing with the city backdrop are amazing. Webber is something of a Bridge Fly Over world champ having driven a Williams F1 car over the coat hanger (Sydney’s iconic Harbour Bridge) back in 2005.

“Of course there will be the critics who question the disruptions to traffic and whether he broke the speed limit etc. Hey guys, it’s OK to look for the positives in a story too. Or how about providing a bit of balance? You know, the first thing all good reporters are trained to do. Logistically these are extremely hard events to organise and in my view it was executed brilliantly. The bridge closure was short. He stuck to a 100kmh speed limit. The car even had an e-tag on it. I watched them bolt it on! This unique vision will go all round the world and showcase Melbourne superbly ahead of what is now the season opening race. It’s a great reminder to all that the F1 season is about to start. Most importantly a good crowd was there to greet him when the drive ended. It was a nice welcome home.

“For those of you who follow the sport closely, MW says the race next weekend will have a different feel about it given the regulation changes like adjustable rear wings, the return of KERS (an energy recovery system that gives the car a boost of power) and perhaps most importantly the new control tyres which everyone is still getting their heads around. Expect the usual suspects though. Sebastian Vettel, Lewis Hamilton, last year’s winner Jenson Button and Ferrari’s Fernando Alonso. If you thought 2010 was an exciting season 2011 looks every bit as good … maybe even better.

“So Grand Prix week is underway. Mark touched down first thing this morning. The final touches to the circuit are being made, the cars will start arriving and so will his rivals. The wait is over and I can’t wait for the racing to begin.  Hope you feel the same.”

You can catch all the Formula One action next weekend on Network Ten and ONE HD on the times below;

You can also keep abreast with all of the F1, V8 Supercars and supports action in a special two hour edition of the On The Grid at 7am, live on sports radio station 1116 SEN.