Sydney Dragway’s March 18 and 19 Aeroflow Event for Top Doorslammer and Pro Stock has been cancelled due to rain. 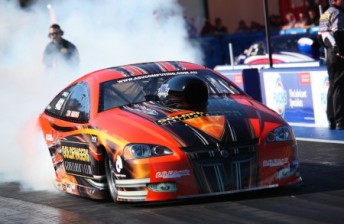 The wet weather made its first appearance during the opening round of qualifying for Top Doorslammer on Friday evening, with the decision made to move qualifying to Saturday morning, to be followed by the evening’s scheduled elimination rounds.

However heavy and persistent rain this morning and a Sunday weather forecast mimicking today’s conditions saw the event cancelled before either of the Pro Series brackets could take to the track today.

Pro Stock did manage to complete one round of qualifying on Friday evening, with Andrew Stavroulakis topping the time sheets with a 7.15 second pass followed by reigning champion Aaron Tremayne with a 7.16 second pass.

The cancellation continues a rough run for the Pro Stock racers’ ANDRA Pro Series championship, with two rounds already lost to rain this season.  Talks are currently underway to move the Pro Stock round to April 8 and 9 at Sydney Dragway, during a scheduled Track Championship Event, with more details expected to be released by the track management in the coming days.  There does not appear to be a plan to reschedule the Top Doorslammer round in progress currently.