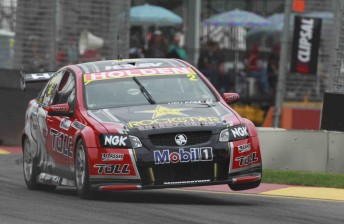 His 1:22.6s lap in the top 10 shootout saw him end the session 0.2s clear of Jamie Whincup, after the TeamVodafone driver lost crucial time in the opening sector of his lap.

Paul Dumbrell was the last man out in the session after topping qualifying this morning, and appeared set for the first two rows before an off at the final corner.

Below is the starting order for Race 3 of the V8 Supercars Championship.