Casey Stoner the one to catch in Qatar

Casey Stoner the one to catch in Qatar 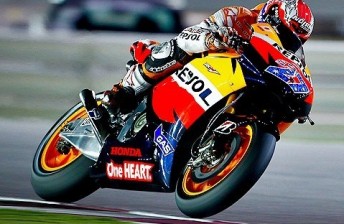 Casey Stoner has been hot in Qatar

Repsol Honda’s Casey Stoner has set the fastest time in the final MotoGP practice session for the Commericalbank Grand Prix of Qatar.

The Australian again dominated practice at the Losail International Circuit with a best time for the entire meeting so far of 1:55:035.

It was a Repsol Honda one- two-three, with Dani Pedrosa (Spain) second and Italian Andrea Dovizioso third. The Spaniard was only 0.158 off Stoner’s quickest lap, whilst Dovizioso was a further 0.705 behind.